This month, I'll feature a guest blogger, Emily Wu. She's volunteering at the Chinatown Storefront Library, an involvement I'd love to take if I were still living in the area. She hosts "English Conversations with Emily" on the days that she volunteers. Her words:

I'm sitting in a beanbag chair in the Drawing Lab section of the the temporary Chinatown Storefront Library, a nice cozy place to be on a rainy fall afternoon. Glancing around as I walked in, I counted easily 20+ others here. Most look like they live in Chinatown-- children huddled together on the stools that make up the "children's pod," and elderly men and women reading newspapers in the "reading room" area that they have claimed as their own. The red-cushioned stools that are usually stored under the shelves have been pulled out and arranged to form a circle in the corner, creating a sense of community where a family is gathered, reading together. 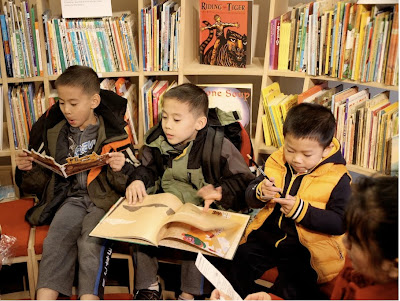 From my vantage point, the lines a curves of the space are pleasing to the eye-- the suspended lighting over the contoured shelving constructed by the Harvard grad students, the black-and-white wall to my left, covered with drawings by youth and children.

Sam Davol just walked by with a high-school-aged volunteer, showing her the ropes or perhaps giving her an assignment. I realize that the volunteer is a former Project Destiny camper! (Later on she notices me too and greets me as "Ms. Wu." =) ) It's much busier here now than on a Wednesday afternoon, when I first came in to volunteer.

As I write in my journal, I also engage in another favorite pastime of mine-- people-observing. The father and daughter who were in the circle of cushioned chairs are now in the Drawing Lab, speaking Cantonese. But the daughter reads the directions to the touch station and zoetrope aloud in English. She likes when her dad is nearby, watching her. Whenever he starts to move away to another area, she looks up from her work and calls out to him.

A mother and son have entered the Drawing Lab. Mom tells her toddler, “¡Siéntate!” on the chairs and also exclaims,  “¡Qué lindo!” over the drawings on the wall. Dad speaks to the boy in English but then switches to Spanish with an American accent to say that it's raining out and they should leave soon.

The Cantonese-speaking father is now speaking English to his daughter, as he shows her something in a book about hot air balloons. "Interesting things here... you see?"

A pair of sisters comes in and takes over the Drawing Lab activities. "Jie jie! Can I copy you??" This appeal is repeated three times by the younger sister until the older sister deigns to notice and gives her assent. 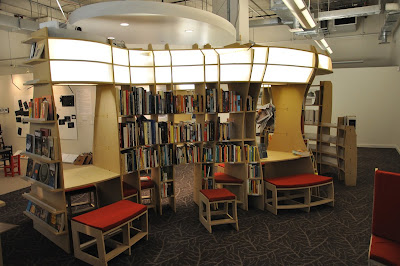 More than a place for books and educational resources, a library in Chinatown can bring a neighborhood together. People who would be considered "strangers" in any other setting become "neighbors" when we share an afternoon at the library. Already this temporary storefront library has become a gathering place. It has been open for 8 days. I wonder if and how we'll feel the loss when it's all over in three months.

Thanks Steve, this was encouraging to read!

Hey Daniel. Thanks for reading. I got fitted yesterday and I got 50% off any suit I chose to buy between now and February. If I play my cards right, my discount can exceed the cost of my rental!

Steve
I'm a a seminary student at Gordon-Conwell who has his eyes set on serving in Pastoral Ministry. I've been a teacher in Boston Public Schools for several years. I've also had the blessing of being involved in other ministries, like VAC in Dorchester and BCEC in Chinatown. Things tend to happen to me: accidentally washed my hands in a urinal, struck by lightning... twice, sunroof flew off on the highway, car caught on fire on a highway...

Promote Your Page Too